All You Wanted to Know About Canadian Contemporary Art

By: Stew Roberts
In: Prominent figures

The visual art in Canada has always been one of a kind, shining through even in the darkest of time. Canada has been a place that has produced raw talent. Artists that have the kind of eye that the world envies and numerous contemporary and modern art master pieces find their home in the galleries of Canada.

Roots Of Art in Canada 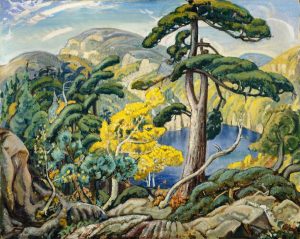 The indigenous people in Canada have produced Contemporary Aboriginal art since 1945. Due to the prominent presence of the same, two schools of art has risen in the country concentrating on producing the best contemporary artists the world has seen. The West Coast Aboriginal Art and the Woodlands school of Legend Painters are the names of the two institutions.

Apart from the great creativity that these schools nurture Canada is also filled with independent artist who work in the same field, creating pure beauty in the form of modern paintings filled with contemporary concepts and techniques.

Names You Need To Watch Out For

The past century – we have seen a significant rise in the number of quality artist who have hailed from the land of Canada. Anyone who knows anything about artists in Canada has heard about the Group of Seven.

Every discussion on the topic of contemporary art will have their name in it. They were the backbone of the first national artistic movement in Canada. The dawn of the 20th century marked the first painting that experimented with abstract arts. These were all the works of artists like Kathleen Munn and Bertam Brooker.

As of now the major people rising up in Canada include the leader in the field of non-photography, the exceptionally talented, Jeff Wall.

Phillip Guston is another artist who brought to life a very unique style of art. He has won the hearts of millions of people with his charming way of bringing cartoons to life. More commonly the style is termed cartoon realism.

Taking a step back we notice Marcel Barbeau who has a legacy of a career spanning over seven decades. His main focus was on bold use of colours and altering the way that the viewer perceives his art. It was a truly novel method with which he conducted quite a lot of experimentation.

With its rich culture in art, Canada has no shortage in galleries that showcase these amazing works. One of the most famous galleries is the Cooper Cole Gallery being adamant in the fact that they won’t be adhering to any one strict style criterion. They are known for putting up shows with conceptual paintings and abstract sculptures.

Other prominent galleries include the Clint Roenish Gallery, Wil Kucey Gallery and Angell Gallery, all of them focusing on displaying the works of indigenous artists. Between all of them they offer the visitors an array of masterpieces ranging from every possible class of art in Canada.